Majority of parents in Singapore dream of their children entering a top school. They will do everything in their power to help their children succeed.

As most of you are aware, entry into secondary schools is usually based on the results of the Primary School Leaving Examinations or PSLE. However, this route can be the toughest as you need to achieve a near perfect score in order to gain a place in a top school. Recognising that not all students can achieve such high academic scores, top schools will admit students via the Direct School Admissions scheme or (DSA).

What is DSA? For those who don’t know, the DSA exercise is an admission exercise that allows participating secondary schools to select Primary 6 students for admission to secondary one. The selection will be based on the students’ achievements and talents before the PSLE results are released.

There are many secondary schools in Singapore and some of them are more “popular” than others. I wanted to get into either Raffles Institution (RI) or Hwa Chong Institution (HCI), both of which are considered by many as the top boys’ schools in the nation. So, it was not easy to get an offer from either schools.

As I have a talent in playing table tennis, I knew that I had a chance of entering one of the top school through DSA. My parents did not want me to try for RI as they preferred HCI instead. However they allowed me to decide which schools I wanted to DSA to and since there was nothing to lose I decided to try both schools. Over the next few days, I felt that my decision was a little rash. There were many students trying for RI and most of them were the best of the best. It would be an incredibly difficult challenge. My table tennis coach decided to train me even harder for the DSA trial for RI, and it was a tiring process. I had to run 6 rounds in the stadium during every training session instead of the usual 3.

The DSA process also included interviews and selection tests. To increase my chances of being selected by the schools, my parents decided to enroll me at J Carter Centre to prepare me for the interviews. I was taught many useful techniques by the helpful Teachers to prepare me to succeed. I was painfully shy during the first lesson but after a few more lessons, I warmed up to the sessions and I had a memorable time learning from the teachers.

Three months to the DSA trials, my table tennis coach began training me harder than before. I was introduced to a lot of new but tedious techniques that was tougher than what I had been doing previously. To make it worse, I had to change the rubber on my table tennis bat to a completely different one. It was hard to adapt and get used to playing with a totally different rubber bat.

I was extremely anxious that the last minute changes would affect my performance during the DSA trails.

On the day of the Raffles Institution’s trial, there were a total of twelve players, ten of which were from the national youth squad. Upon looking at them, I could tell that it was not going to be an easy road ahead for me. I was extremely afraid when the coach arranged for me to play with the singles champion in my age group. It was surprising that I managed to defeat him after an extremely tough fight. All the workouts and training had paid off! After that, I played with a few more youth players and even though I lost to some of them, I felt that I had outdone myself on that day.

Hwa Chong Institution’s trial was a breeze compared to RI but there was still the selection tests which assess the students on academic ability. Both the tests and the interview were difficult but thankfully my teachers at J Carter Centre had prepared me well enough so it was simpler than what I thought it would be.

The weeks before the release of the DSA results, I could feel the tension at home. I could tell my parents were extremely anxious about the DSA results. I was also worried that I would not be able to get a ‘Confirm Offer’ from either schools.

Finally, the letters with the RI and HCI school crest came through the mail. I was over the moon to receive confirmed offers from both schools. I was thus in a dilemma. I did not know which school to choose as I favoured both schools. However, after a long consideration, I decided to go to Raffles Institution as their Table Tennis record in recent years were better than Hwa Chong’s. I also felt that the programs and learning environment in RI would be better for me.

I have now completed my first year in my dream school and I have not regretted my decision to go there.

The school is huge and the learning environment has been good. The classrooms are air-conditioned and the facilities are amazing. The seniors are friendly and not afraid to share their knowledge with the rest of us. The teachers are helpful and creative, often planning interesting activities to enable us to learn better. Direct School Admissions was not only a route to the school I wanted to be a part of but it was also a learning opportunity for me. Surrounding myself with supportive people like my parents, teachers and coaches also prepared me to go through the process with confidence and ease.

The experience also taught me that hard work and perseverance is necessary to get what I want in life. 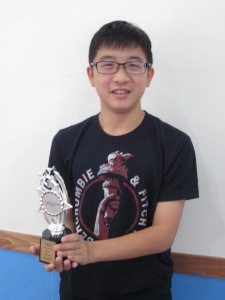 P.S. Thank you Brendan for the vote of confidence. Ms Joyce and I enjoy having you as a student at our centre.

Latest news from our enrichment centre will be posted on this blog. Check back often for updates. View all posts by J Carter Centre